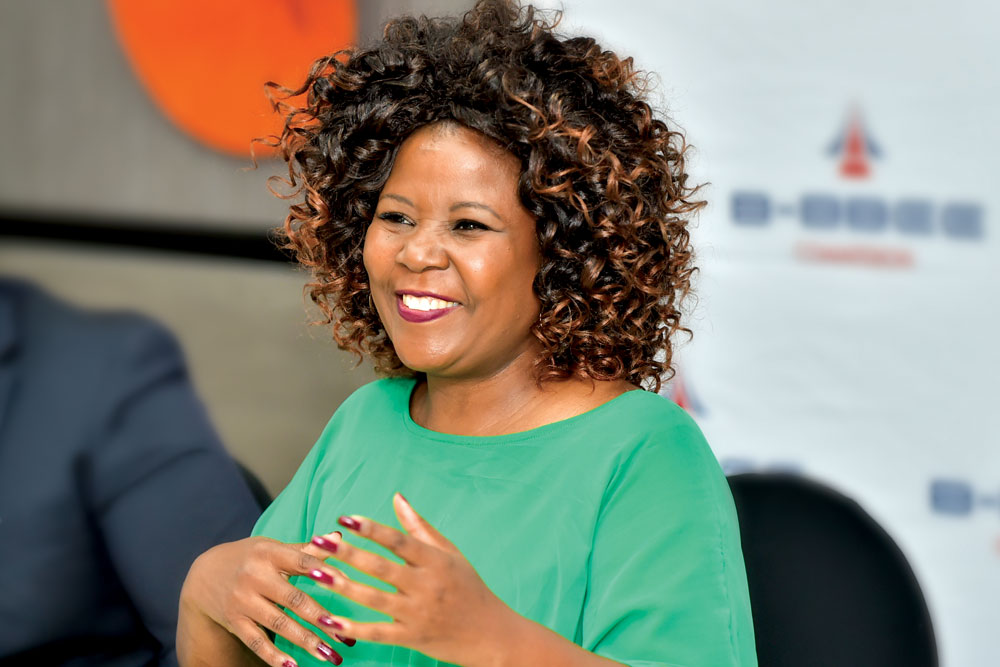 Zodwa Ntuli, head of the B-BBEE Commission, speaks about the challenges of making companies comply with transformation legislation.

More than 80% of the complaints received by the Broad-Based Black Economic Empowerment Commission (B-BBEE Commission) relates to fronting, which is a major concern, says the head of the commission, Zodwa Ntuli.

Interviewed at her office in Centurion, she said that fronting was the reason why the BEE legislation was amended in 2013 – leading to the formation of the commission – and it remains a serious challenge in South Africa.

The sectors where they receive most complaints about non-compliant companies are construction, transport, mining, engineering and ICT – and most of these relate to fronting.

“It is going to take not only the commission’s oversight, but also the governance committees of various companies to scrutinise their own BEE deals to make sure that those are not fronting deals,” she said.

“We are really concerned about that. We cannot do anything about what happened in the past, but we should be able to deal with it going forward. Cooperation between the government, private sector and regulator is going to be very important.”

The government’s inability to deal with fronting was one of the main reasons the BEE Act, passed in 2003, was amended in 2013.

“After a decade of implementation, the Department of Trade and Industry (dti) conducted a review of how we were doing in terms of that legislation and how it had been applied and operated. The review identified a number of gaps, key to this being the lack of monitoring of how it was implemented,” said Ntuli.

“Arising from the lack of monitoring was the scourge of fronting that was taking place in the country, which could not be dealt with because there was not a mechanism in the 2003 legislation to deal with it.

“This is why Parliament passed amendments to the Act, to deal with the gaps identified by the review. Part of that was the creation of the B-BBEE Commission as the regulator to monitor and ensure that the legislation is implemented properly.”

The commission was not set up immediately. It was only established in 2016 and is still in the process of establishment.

“Among the amendments to the BEE Act in 2013 was the provision to criminalise fronting as a practise which undermined what the empowerment legislation was intended to achieve,” said Ntuli.

Asked if anyone has been convicted for fronting, Ntuli said there were processes in terms of which they assess compliance.

“There are still many companies that are not complying. Our first strategy is to drive compliance. We encourage companies to understand the requirements and to formulate B-BBEE schemes and initiatives that comply and achieve the objectives of the Act.

“In this case, the commission is an adviser to the companies, helping them do the right thing. We also advise people who are supposedly beneficiaries of the B-BBEE legislation.

“We assist companies or any person that needs advice relating to BEE. You can send us a written request to clarify any aspect of the B-BBEE legislation and we will clarify it for you.

“Where companies are not sure whether upcoming transactions are BEE-compliant or not, we provide advisory opinions. They can present that transaction to us in detail and we will analyse it to check whether it is compliant or not. If there are areas they need to remedy, we can advise them how to correct that.

“We also provide information sessions to anybody who makes a request. We do this for boards of companies, the public and government departments so that we can make sure that there is more awareness of what is expected in terms of the B-BBEE legislation.

“Through our compliance-driven strategy, we expect to reduce the level of fronting because we expect all transactions that are being concluded to be compliant so that at the end of the day, we will get real value in the hands of black people.”

But the commission also has a corrective enforcement strategy.

“Where there are deals that have already been concluded and do not comply with the Act, if there is a complaint, we will investigate it. If we believe a deal can be remedied, we will make recommendations on how it can be corrected.

“We will put timelines to it and the parties involved will monitor them and, where they do not comply with those remedial recommendations, we have no choice but to refer them for prosecution.

“There are many transactions that happened before the legislation was amended, but those transactions are still running. We are more likely to recommend that they be corrected if we find that there was something wrong with them. If they are not corrected, we will prosecute.

“However, for new transactions, people know that fronting is a criminal offence and are aware of what needs to happen. Where there is blatant criminality, we refer those cases for criminal prosecution to the SAPS and the National Prosecuting Authority.

“Once we have referred it for criminal prosecution, it is out of our hands. We are not criminal investigators. The legislation gives us powers to do general oversight on what is happening with regards to BEE and to ensure that the legislation is adhered to.”

Ntuli said that the commission does daily media monitoring to check on BEE deals and would sometimes call companies to bring the deal to the commission to look at. But the commission also receives complaints and makes findings and recommendations.

“Most people come to us directly, others come through their lawyers, but any person can lodge a complaint if they suspect fronting or a misrepresentation of their B-BBEE status or general non-compliance with the B-BBEE Act.

“The commission will look at the merit of every complaint and once we have investigated, we will issue our findings. Our findings are supposed to be published in the normal course.”

The commission is also supposed to receive annual reports on empowerment from JSE-listed companies, all organs of state and public entities.

“In these reports, these entities are supposed to tell the commission how they are doing in terms of compliance with B-BBEE legislation. They must measure all the elements, such as ownership, management control, skills development, enterprise and supplier development, socio-economic development, and the additional elements that are unique to the sector codes. For instance, the financial services sector codes or the tourism codes will have additional things that they will measure with regards to the entities in that space.

“After receiving that information, we give the companies feedback on their B-BBEE performance, but we can also conduct site visits if we doubt the report submitted, so that we can verify if the report is legitimate.

“At the end of the year, the commission is required to produce a report which tells the country, based on the reports submitted and information contained in B-BBEE certificates, how we are doing as a country with regards to B-BBEE. We released our first report in August 2018.”

“In the 2013 legislation there was an amendment to create transparency. Every BEE transaction of R25-million or more must be filed with the commission of which we will keep a register.

“That requirement started to take effect in June 2017. Every BEE ownership transaction of R25-million and above must be reported to us. We look at whether it complies with the requirements and register it.

“If we pick up things that are not compliant, we are required to notify the companies and give them feedback on what we are concerned about. We give them time to remedy that and, if they fail to do so, we launch an investigation where we make findings on whether we feel the deal is compliant or not.

“Once the findings are made, the deal would either be a fronting deal or a misrepresentation or just general non-compliance, depending on the merits of the case.

“Those are the critical changes that came in 2013 with the amendments but they are forward-looking in terms of what we did not have as a country before and what we would like to see going forward.”

One of the problem areas identified by the commission was to strike a balance between enforcement and creating awareness.

“Since our establishment, we have found that many people do not really know the requirements of BEE and rely heavily on consultants,” said Ntuli.

“Our job is to make sure that we create enough awareness to make sure that people are aware of the requirements so that when you enforce, you do so with confidence. There are instances when you pick up that a situation is capable of being remedied, and then you can remedy that. But where there is clear and blatant criminality, we are not lenient. We refer those to the criminal prosecuting authorities and criminal investigating processes immediately.

“So far, our strategy is beginning to show some results. We are receiving increasing requests for advice, proactively from companies, and companies are also beginning to become more transparent about what they are planning to do.

“Companies are now coming to us to check their deals before they announce it, to ask whether we think this deal is compliant.

“The services are here and they are free. If you implement a deal that is non-compliant, it is because you wanted to.”

Ntuli said that, while the commission was not opposed to the use of consultants, there have been instances of companies being misled by consultants.

“Consultants have a role to play because they do advise companies. They have a much closer understanding of the company’s vision, so they would be able to provide advice.

“We have a problem with consultants who give advice that helps the company to circumvent. When we pick up those influences, while we are investigating the company, we also will investigate the consultant. If we make our findings, we will also make it in respect of that consultant because companies pay for these services. The last thing anybody expects is for a consultant to mislead a company and to aid it to flout the law. We really have a very strong opposition towards those kinds of consultants.

“What encourages us is that a lot of our clarification requests are coming from consultants. They send us requests to clarify certain things. If they are not sure when they are advising their clients, they come to us.

“A verification agent must verify itself that what the company is claiming is happening, and you cannot do that by just dealing with the intermediary. You need to deal with the company itself.

“You must conduct interviews. If this does not happen, the B-BBEE levels and the points allocated in the certificate are not worth the paper they are written on because they are just based on what the consultant has provided, without verification.”

“Through our compliance-driven strategy, we expect to reduce the level of fronting”