The Most Affluent South Africans 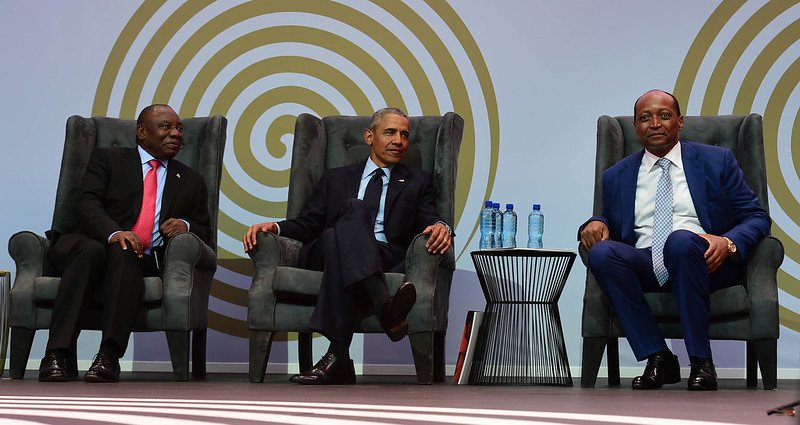 Despite having turbulent memories as a result of our country’s oppressive past, Black South Africans continue to emerge from the dust as critical contributors to our country’s economy.

As economic growth and new resources come to light, what is apparent is South Africa’s empowerment journey, showing just how dedicated and resourceful these individuals are. Thus, it is not surprising that we’re celebrating some of the richest black South African citizens, who are incredible pioneers and wealth generators.

“If we continue doing the right things in Africa, we can create a very exciting and competitive global market here.”

Patrice Motsepe is the founder and chairman of African Rainbow Minerals, and became a billionaire back in 2008 – becoming the first black African on the Forbes list. Raised in Soweto during the height of apartheid, Patrice Motsepe’s business prospects did not look good. However, his undeniable business acumen and determination to succeed have seen him become South Africa’s first black billionaire and the first African to sign Bill Gates and Warren Buffet’s Giving Pledge. A genuine rags to riches story already, instead of stopping as a vastly successful lawyer, Motsepe became a mining magnate. He is the Founder and Executive Chairman of African Rainbow Minerals, which deals in gold, ferrous and base metals, and platinum. As the undisputed richest black person in South Africa, Motsepe sits on the boards of several companies, such as Harmony Gold, and owns a piece of Sanlam.

“We have to build further on the collaboration with business and labour to restore confidence and prevent an investment downgrade.”

The President of South Africa, Mr Cyril Ramaphosa, is respected all around the country for being a great negotiator and strategist. He, Roelf Meyer of the ruling National Party, played a tremendous role in the negotiations to bring about the peaceful end to apartheid, back in the 90s. From politics to business, Ramaphosa has had his hand in multiple different ventures in various sectors. Thus, his investments and leadership skills have enabled him to bolster his own wealth and the growth of the South African economy at large. Following his election to Deputy President of South Africa in 2014, Ramaphosa has stepped away from a majority of his business interests. Prior to that he was Executive Chairman of Shanduka Group, which he also founded. The company has investments in the resources, energy, real estate, banking, insurance, and telecoms sectors. He has held Non-Executive Directorships with Macsteel Holdings, Alexander Forbes, and Standard Bank, as well as being the Chairman of The Bidvest Group and MTN. He has previously held a position on the board of SAB Miller.

“Our team [South Africa] shows strength in the face of adversity.”

Tokyo Sexwale is the former Minister of Human Settlements, and is a well known public figure in South Africa, with extensive experience in both the public and private sectors. Sexwale is a politician, anti-apartheid activist, former political prisoner, and acute businessman to boot. He is a Non-Executive Chair of Mvelaphanda Holdings (which he previously founded), with a keen interest in diamonds and oil. Today, he is one of the biggest figures working in the diamond mining industry. His net worth has been enhanced over the years due to holding stakes in companies such as the Absa Group, Avusa, Life Healthcare and Group Five. He is celebrated for all his philanthropic endeavors as he is a trustee of the Nelson Mandela Foundation, the Global Philanthropists Circle of the Synergos Institute, the Business Trust, and the Robben Island Ex-Prisoners Trust. Sexwale is also a patron of organisations such as the Johannesburg Child and Family Welfare Society, Streetwise South Africa, Save the Family Fund, and The Sky is No Limit.

““As barriers come down and communications improve, the emerging market economies continue to grow strongly.”

Phuthuma Nhleko is a South African businessman, formerly chief executive and executive chairman of MTN Group, a South African multinational mobile telecommunications company primarily focused on Africa. He holds a Bachelor of Science Degree in Civil Engineering at Ohio State University, as well as an MBA in Finance from Atlanta University. Nhleko’s most notable position was as the Chief Executive Officer for MTN. Prior to this, he served as a Senior Manager of the Standard Corporate & Merchant Bank corporate team, as well as a Civil Engineer and Project Manager for the Urban Foundation, and a Senior Road Engineer for the Ministry of Works in Swaziland. During his time as CEO, MTN delivered on all of its broad-based empowerment objectives. At present, he is a Non-Executive Chairperson and one of the founding members of Worldwide African Invest. He also serves as a Director at Old Mutual Life and many other organisations. Nhleko recently returned to MTN as a Non-Executive Chairman, and is a member of the Audit Committee at Anglo American.

“For you are all leaders in your community – we can support each other, share resources, get up and try again tomorrow.”

Occupation: President of the Chamber of Mines South Africa

Sipho Nkosi is a humble, camera-shy businessman who has played a vital role in the transformation of companies (from being completely white-owned into a highly successful company with black representation at every level of management). Nkosi holds an MBA from the University of Massachusetts, Honours Degree in Economics from the University of South Africa, and a Bachelor’s Degree in Economics, from the University of Zululand. Today, Nkosi is known as the past president of the Chamber of Mines of South Africa. Before his appointment to the Council, he played a significant role as a member of the Chamber’s Collieries Committee. Nkosi also served as the CEO of Exxaro Resources Limited and was one of the founders and the CEO of Eyesizwe Coal, and Country Manager of ABB Alstom Power (SA), having previously worked with Anglo Coal and Ingwe. And in 2015, he received the Brigadier Stokes Memorial Award at the South African Institute of Mining and Metallurgy (SAIMM).

“No one has ever become poor by giving.”

Vincent Mntambo’s first experience as a leader was as Head Prefect at Musi High School, in Pimville. As a young advocate, he quickly became involved in the 1976 Soweto uprisings, paving the way for future youth activists. After avoiding exile, he received his LLB from the University of the North West, and gained experience in administrative duties through various roles within the personnel department at the University of the North West, before the Education Opportunity Council gave him the opportunity to study law at Yale University. After returning from Yale, Mntambo spent some time teaching law at UNISA before joining the International Mediation Service of South Africa as Regional Director. He was also a key role player in leading companies such as Eyesizwe Mining and Exxaro Limited.

“The biggest lesson I’ve learned is how important it is to have a mentor when you start your business.”

Recognised as the first black female mining entrepreneur, Bridgette Motsepe-Radebe is a South African businesswoman of Tswana descent, who is known as the Founder and Executive Chairperson of Mmakau Mining Limited – a company she started in the 1980s. Mmakau Mining Limited is generally a mining firm which inducts explorations and assists in producing platinum, gold, and chrome. Wife to South African Minister in the Presidency, Jeff Radebe, Bridgette is the sister of South African businessman Patrice Motsepe and Tshepo Motsepe – the First Lady of South Africa. Bridgette has over 3 decades of experience in the mining industry. She is also positioned as the President of South Africa’s largest mining chamber – the South African Mining Development Association. In 2008, she received the International Businessperson of the Year Award presented by the Global Foundation for Democracy. This accolade recognises businesspeople who have made a significant impact in the world, transforming both political and environmental models.

“If we’re to sustain philanthropic activities and civic-minded programmes, we need to also establish institutions that have the longevity to do so.”

Nkululeko Leonard Sowazi has more than 15 years’ experience in investment management, and has acquired expert knowledge and exposure to the mining, infrastructure, and financial services sectors. He obtained a Master’s Degree in Urban and Regional Planning, from the University of California, and a Bachelor of Arts Degree from the USA International University. Sowazi currently sits on the boards of a plethora of South Africa’s biggest organisations and has been the Chairman of Idwala Industrial Holdings since 2004. Much of Sowazi’s wealth has been generated through the investment industry, specifically, but the money-maker has an acute business acumen and has previously lent his expertise to big names such as MTN, Litha Healthcare Group (Pty) Ltd and Synchem Inc.

“Hard work has never killed anyone. And don’t be afraid to learn.”

Mike Teke emerged from humble beginnings. Having no parents during his youth, Teke was brought up by his grandmother. In fact, it was her wise words that stuck with Teke all these years, and has guided him in all his ambitions. In many interviews, Teke has expressed that he owes all his success to her. Teke obtained a Bachelor of Arts at the University of Limpopo, an Honours degree from the University of Johannesburg, and an MBA from the University of South Africa. He is currently the President of the Chamber of Mines South Africa, and has previously worked for Elida Ponds, Bayer, and Impala Platinum. Teke has gained much of his wealth through the coal industry, having bought Optimum Coal, along with four other investors, in 2008. Teke undoubtedly has a knack for investing in company infrastructure and has seen his business ventures return good profits on a regular basis.

“The question is whether we understand where we are and whether we have the capacity to scope and to cope with the new reality.”

Saki Macozoma is a former political prisoner and apartheid struggle hero who is an ideal example of what a bold work ethic and great attitude can accomplish. During his journey, Saki studied political science, economics and journalism, at UNISA and the University of Boston. Today, Saki is one of the best-known businessmen in South Africa. In 2012, Macozoma (along with Nelson Mandela) received a Calabash Award from the University of South Africa – the highest honour the tertiary institution offers. Macozoma was also the first recipient of the Robben Island Alumnes Award, which honours individuals who served time imprisoned on Robben Island for fighting against the oppressive state system of the apartheid regime. In previous years, he served as chairman of the University Council of the University of the Witwatersrand and the Council for Higher Education, and as a member of the G20 Business Council. He is chairman of Safika Holdings, Tshipi é Ntle and Ntsimbintle Mining, Group Chair of Vodacom and a Director of Volkswagen South Africa.